This is what their flyer read;

Join Immokalee tomato pickers and their families in urging Wendy’s to commit its buying power to farms that comply with the industry’s new Fair Food Program to improve wages and ensure basic rights of farm workers. Of the five largest fast food corporations in the country, Wendy’s is the only one not participating in the Fair Food Program. Let’s make Wendy’s grow up and get with the Program.

By committing to the Fair Food Program corporations are demanding more humane labor standards from their Florida tomato suppliers, paying a small premium to improve workers’ pay and purchasing exclusively from growers who meet the Programs higher standards.

Of the five largest fast food corporations in the country McDonald’s, Subway, Burger King, Taco Bell, and Wendy’s – Wendy’s is the only one not participating in the Fair Food Program. Sustainable restaurant leader Chipotle Mexican Grill also participates

red balloons to hand out to everyone

gathering at union square with red braids in their hair 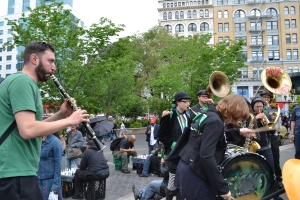 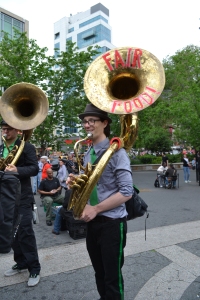 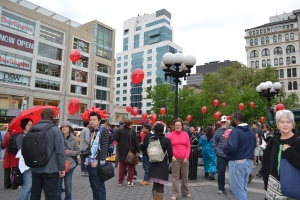 gathering and handing out red balloons 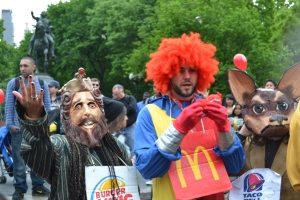 So we gathered at union square. At first just a few signs and people wearing red yarn braids in their hair, soon more and more people with more and more colorful props started to gather. Before long red balloons, yellow flags, Wendy faced signs and a big Wendy puppet, a band playing, then speakers and silent theater telling a story of why we were all gathered to protest Wendy’s. After rallying at the park a while we walked to the first of 3 Wendy’s which happened to be right across the street so we were there in about 5 minutes standing outside, handing out info to people walking by and picketing in front of the Wendy’s chanting and making lots of noise so everyone would know we were there and why. The police were all around us but there was a permit so they were allowing us to protest. After about a half hour of protesting in front of that particular Wendy’s we moved on marching to another. 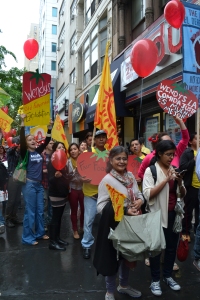 one of the many signs 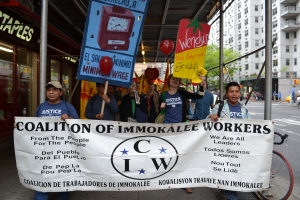 Front of the march, Coalition of Immokalee workers

Wendy’s annual meeting is taking place this week which is why this Saturday was chosen to come out and march. To let them know we are here and put pressure on them to do the right thing and sign the fair workers agreement. The march was high is spirits, lots of smiling people of all ages all races everyone represented in this group marching for the reason of farm worker justice.

I livestreamed and took pictures and I’m getting a little bit better at it with every time and I am enjoying documenting more. 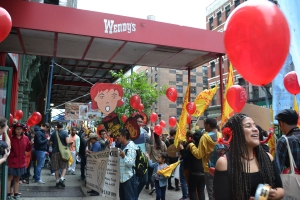 People coming together in support of farm workers rights. It was a great action.

If you would like to help occupy bus tour, a donation of any amount is greatly appreciated and would help us in our effort to keep up working full-time for the occupy movement. People power

Sorry for the inconvenience; we are running out of storage space on this free blog because of all the content we've posted. So follow us on to our third free blog Occupy Bus Tour (Blog 3). Thank you for your support! 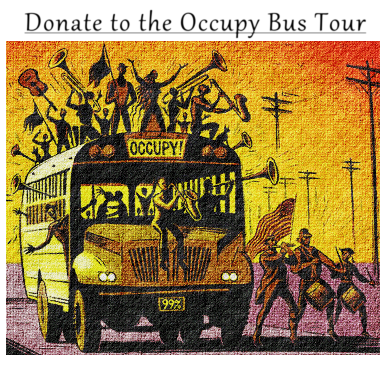